There are no upcoming events to display at this time.

On March 6, 1651, 370 years ago today, John and Joan Carrington were hanged for the crime of "witchcraft." John Carrington, b. 1610 in England sailed with his first wife Mary, and arrived to Boston 1635. They later had one child, John, born 1640 in now Simsbury.
After they moved to Wethersfield, Mary died. John later married Joan, a much younger woman(age 19) with whom they had one child, Rebecca in 1650.
What went so wrong for this couple? John, a carpenter was buying up land in Wethersfield and was accused of "bartering a gun" with an Indian. This was a real no-no because the settlers most likely felt, after the Indian Wars, they could use the bartered weapon on them! However, bartering went on behind the scenes all the time in Colonial Connecticut. Were these the reasons for the hanging?
A low born carpenter begins to amass land and barters weapons with Indians. What about his young, second wife? What was her crime? A convenient crime of association, most likely. If they let her live, she'd own John's former property. Regardless, a truly tragic aspect is they left a 10 year old son and a year old daughter. What happened to the children? Perhaps they became fosterlings and then indentured servants? Either way, it was a tragedy for the 43 year old carpenter and his wife. They would be the first couple hanged in tandem in Connecticut, but alas, not the last! ... See MoreSee Less

The constant on a lot of the cases is that the individuals owned land or were widowed. The state claimed all property and money once they were accused and jailed found guilty. Ct usually tried individuals by water trial. The ones willing to pay were allowed to pay for a rope tied around the person to pull them up after they sunk. Almost all the cases points to the state and government funding an easy way to get money and property... thoughts ?

This book you wrote was awesome!! Enjoyed it so much and it was very informative about the history of witch hunts in CT!

Good Morning! I'm truly sorry it's been awhile since I posted on "Days to the Gallows." Many of you know I've been dealing and recovering from a tough illness these last few years(not covid). Thankfully, I'm stable, tired but doing better.
I will try to post more interesting witchcraft aspects in the future.
I am busy on my third book, another Conn./New England Witchcraft Tale. I'm quite excited researching and writing it.
Although I haven't posted anything about my second book here, "Vestal Virgin: Chosen for Rome" I'm happy to report it's taken 5 top Winner Awards in Indie Book Contests and is getting great reviews.
When my third book comes out, I will be renaming this FB page, "Days to the Gallows and other Novels" to include on this page. Stay tuned! I'll let everyone know when my next book will be out. In the meantime, I'll do my best to post more regularly.
Stay safe, well and Blessed Be!
Katherine xoxo ... See MoreSee Less 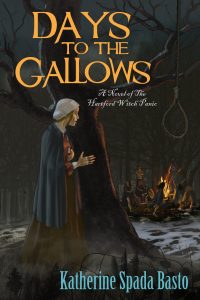 Days to The Gallows by Katherine Spada Basto has received numerous awards.